I fought the law and the law won… 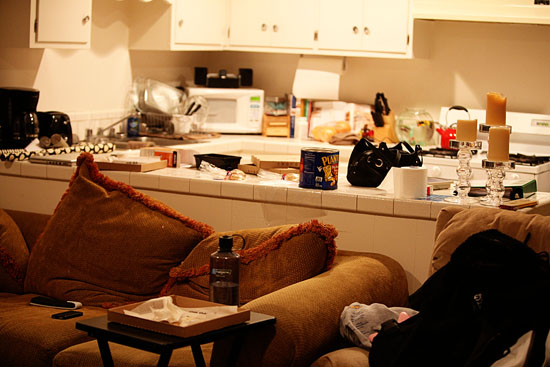 This photo really doesn’t convey the mess that was my living room and kitchen last week. Normally, it gets cleaned or at least picked up on an almost daily basis. But, with seemingly endless amounts of prep work to do for my boyfriend’s interview for the police academy, cleaning the house had really taken a backseat. Dishes filled the sink. the counters were covered in miscellaneous items used in the previous week, and pizza boxes and dirty laundry strewn about just completed my nightmare. But there would be lots of time to clean the house in the upcoming days. That night, the only thing that mattered was getting Travis ready. He’d been physically training, filling out paperwork, making appointments, studying and so much more for months. He passed the written exam, the physical exam and the psych exam; his acceptance now hinged on one 20 minute interview. 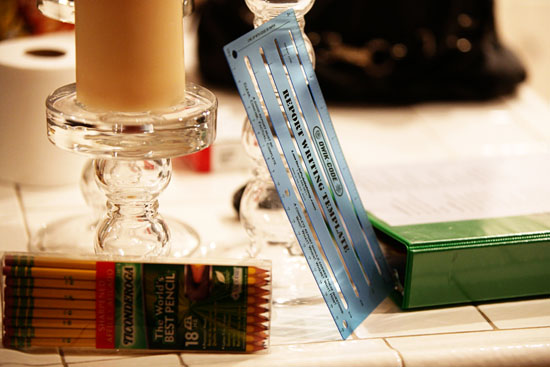 School supplies. I thought I’d be done with these until I have kids! But I’ll admit I am a sucker for the smell of freshly sharpened pencils and I had an awful lot of fun organizing all of his paperwork into a three-ring binder. I don’t want to go back to school myself – but I’ll gladly do all of his supply shopping and organizing for him. That blue ruler thing in the middle? It’s an evil little dictator of perfect handwriting – a report writing template. Travis had to use it to write his autobiography; four pages of handwritten text that had to be written between the guidelines of the template. I was glad he had to write it not me! 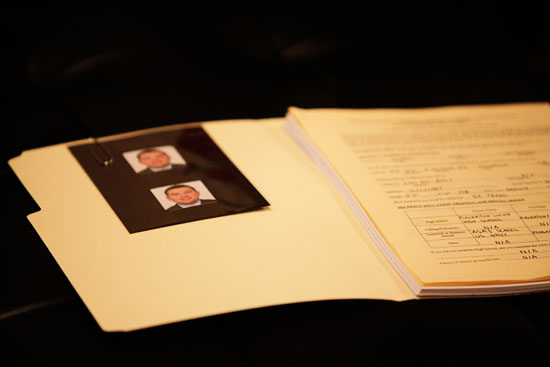 It doesn’t look like much, but this manila folder contains Travis’ entire life story. We’d been working on several of the pieces over the previous few months, but in the final week we spent about 50 hours between us filling out packets, writing his autobiography, carefully initialing every page and making sure that not one bit of information was forgotten. In the folder is an academy application, a personal history (forty pages!!!), a health history, an EKG, an autobiography, his driving record, pictures of him and so much more! We took great care to make sure not a page got smudged, there were no spelling errors and every single blank was filled out.

The night before his interview we cut his hair. It was my first time and I’m definitely going to need some practice. This time we needed to just clean it up a bit and take the length down a smidge. Clean cut is what we were going for – but not necessarily military. I made a mess. I got hair EVERYWHERE. There is definitely more skill involved in this than I thought! As a recruit his hair will be buzzed down next to nothing – but he didn’t want to seem over eager for his interview.

Normal things go on our calendar in black. But special things get color. The interview was definitely written in blue. Nervousness and excitement filled our tiny little apartment on Sunday night. I kept staring at the little notation on the calendar thinking, “6 months of preparation all come down to tomorrow.” I knew Travis would interview well – I had no worries or doubts about his history or his abilities. But you never know what might happen. And I like to think about everything that *might* happen. Like alarms not going off on time (setting 2 alarms each helped prevent that mishap), traffic on the way (which he hit a bad patch of but still made it on time), spilling something on himself before he got there (no, he looked impeccable on arrival) or the interviewer being just plain difficult (he was fine). I think too much.

The big morning came and as he headed out the door I stopped him for one quick picture. He hates having his picture taken like this, but loves me enough to smile and let me capture the moment. Isn’t he sooooo handsome!?

He was accepted! In just a few weeks Travis will begin Golden West College’s Police Academy Class #144. I am so proud of him and can’t wait to go through all of the trials and tribulations that lay ahead for us in this process.

“I Fought the Law” by The Clash

« But right now it’s you and me forever girl…I will dance, I will sing… »

© 2022 TheRockStudio|ProPhoto theme Coronado by The Shoreline Collection | Designed with love by Seaside Creative.